After talking with Johnny (interview below) we looked up some of the long history on flutes and it was awesome. We definitely recommend this site if you want to learn more. But in case you don’t have time for that right this second, we did a really quick overview for you.

The oldest known flutes, found in present-day Germany and France, are over 40,000 years old. These are made of bone meaning there may have been less durable wood or reed versions preceding them which have not survived.

This flute required a very specific embouchure, or mouth position, to direct the air in a way that would produce sound. In an effort to make it more accessible to players, the flute went through many changes and adaptations since then. This included the creation of the reed aerophone which added vibrating reeds to create sound (oldest example 2500 BCE). That’s right, the addition of the double reed, was intended to make the flute easier to play.  Go annoy your double reed Friends with that fun fact! (This may be a little oversimplified, but they don’t have to know that.)

Another change was the transverse flute, held sideways like the Western classical flutes we recognize today.

Eventually the duct flute was also created to help  with difficulty. It has a chamber designed to take the place of an embouchure in directing air for sound production. Examples of this flute have been found in many cultures and include the medieval origins of our familiar recorder.

The Native American Flute is an improved type of duct flute. While there are aspects of the mouthpiece and chamber that are a consistent marker of this flute there are differences between flutes and flute-makers which result in different sounds and even different fingerings.

If you like the history of instruments as much as we did, check out this nifty timeline of flutes across Europe and the Americas to learn more about the crazy changes the flute has gone through.

While much of the details of flute (pre-bone) origins are lost to time, many cultures have legends of the first flute pasted down through oral tradition. They often center around the importance of music in that culture–ranging from expressions of emotion and grief to the importance of listening for spiritual guidance.

While the histories of the flute and of the learning of Native American culture are long and complex, we hope this was a great starting point to make you want to know more. And if nothing else, now you know how easy double reeds are. Seriously, just try and tell your bassoon and oboe friends their lives are easier than a flute player’s :p

And now, let’s hear from Jonny!

How did you start playing folk music?

When I first heard the Kingston Trio’s “Tom Dooley” in 1958, I loved the simple way the song told a story. The song is based on an actual murder in North Carolina in 1866 by a man named Tom Dula, whose last name was pronounced “Dooley”. As I was just learning to play guitar back then, it’s simple two chord guitar accompaniment was easy to learn and play. After that, I followed all the folk music performers during the so-called “folk music revival” of the later 50s and early 60s. I hooked up with a friend from church and we formed our own folk group [the Bayou Brothers]  in 1962. 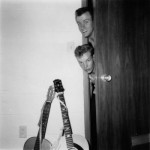 What sparked your interest in Native American style Flute?

That’s an interesting question. Back in early 2006, my wife went up to visit her sister in Asheville, NC, and brought me back a CD of Native American Flute music. Later that year we went up to Cherokee to see the pageant “Unto These Hills.” The opening act was a flute player. We had great seats and I was able to clearly see how he played it. After the show, we bought his CD and I listened to it many times and loved the simplicity of the music, and the beautiful tones. It wasn’t long before I bought my first flute and taught myself to play it.

Can you tell us more about this instrument? Are there different traditions and origins? How can we learn more?

The history of the Native American Flute is mostly lost to time. Flutes probably arrived in the southwest U.S. from South and Central America. There are legends of ancient flute players, like Kokopelli, supported by petroglyphs on canyon walls, and accounts from early Spanish explorers to the area. The best place to start learning is a website hosted by a good friend and scholar, Clint Goss, at www.flutopedia.com.

The most ancient of Native flutes are just hollow tubes with playing holes. The forerunners of modern Native flutes introduced a more complex sound mechanism, consisting of two chambers in line, with a “bird” on top that provides a small pathway between the chambers. Originally these flutes were tuned to whatever sounded good to the maker. Today almost all modern flutes are tuned to a de facto standard pentatonic minor tuning. It’s this tuning that makes the flute so easy to learn.

We know you help and perform with Native Rhythms Festival that takes place this year in November. Can you tell us about that and what makes it special?

There are a couple large Native American Flute festivals around the country each year. Back in early 2009 a good friend, Mike Knight, asked me about staging our own festival at Wickham Park. I said I loved the idea, but he had to be the chairman. So that November, declared Native American Heritage Month by the President, a small group put on the first Native Rhythms Festival. Each year since then, the festival has grown. This will be our 7th annual event and we expect a record turnout.

What makes Native Rhythms special is that it is a family-friendly event (i.e., no alcohol), with world class entertainment, that is made available free to the public. Five of our performers have just been announced as nominee finalists for the prestigious Indian Summer Music Awards, most of whom have multiple nominations. In one category, all of the nominees will perform on our stage this November. There will also be a wide variety of juried artisans, about half of whom are flute makers, with works featuring either Native American or nature themes.

Tell us about the process of adding a new song to your repertoire. Most folk songs are actually old so how do you approach them to make them new and unique to you but still true to the history?

One characteristic of much of what we call folk music is that the songs have very long histories, and that the songs evolve over decades and even centuries. [For example,] Versions of the song [“House of the Rising Sun”] go back to the 18th century, with the first mention of a pub called the “Rising Sun” in a version published in 1877. It wasn’t until the mid-twentieth century that it became associated with New Orleans. When I research an old song that I’d like to do, I first look for all of the disjoint verses that have been sung over the life of the song, and choose a sequence of verses that better flow as a story. Sometimes I modify verses or even write my own to make it all flow. Then I try to imagine how it will best sound instrumentally, and especially how it might sound on a flute.

Can you tell us more about your sound and style?
I’ve been playing guitar for over 50 years, even taught guitar at a couple studios to help pay for my undergraduate studies. I’ve also been playing 5-string banjo and autoharp almost that long, but the guitar is my first love. As I’ve said, I developed a love for the Native flute less than a decade ago. I love the sound of the guitar and flute together, so I’ve sometimes either played guitar for a flute player, or flute with a good guitarist. Now that I’m doing more solo work, I want to be able to play both the flute and guitar in the same song. Thanks to modern technology, I have an electronic device called a looper. On it I can record “loops” of my guitar for the sections of songs during which I want to play the flute. Then, when I play the song, I can playback selected loops with a foot-switch to continue the guitar backing while I play the flute. When I finish the flute solo, the playback stops and I continue with the live guitar. If I do it right, the guitar part should sound continuous and uninterrupted during the flute solos. I plan to make good use of this during my set at your October 25th concert.

For more info about Johnny visit his Facebook or website and of course meet him at our show!

Johnny will join us for “Friends of Folk” a celebration of music traditions that includes both folk and classical musicians. Sunday October 25, 3 pm; Trinity Wellsprings 638 S Patrick. Tickets $10