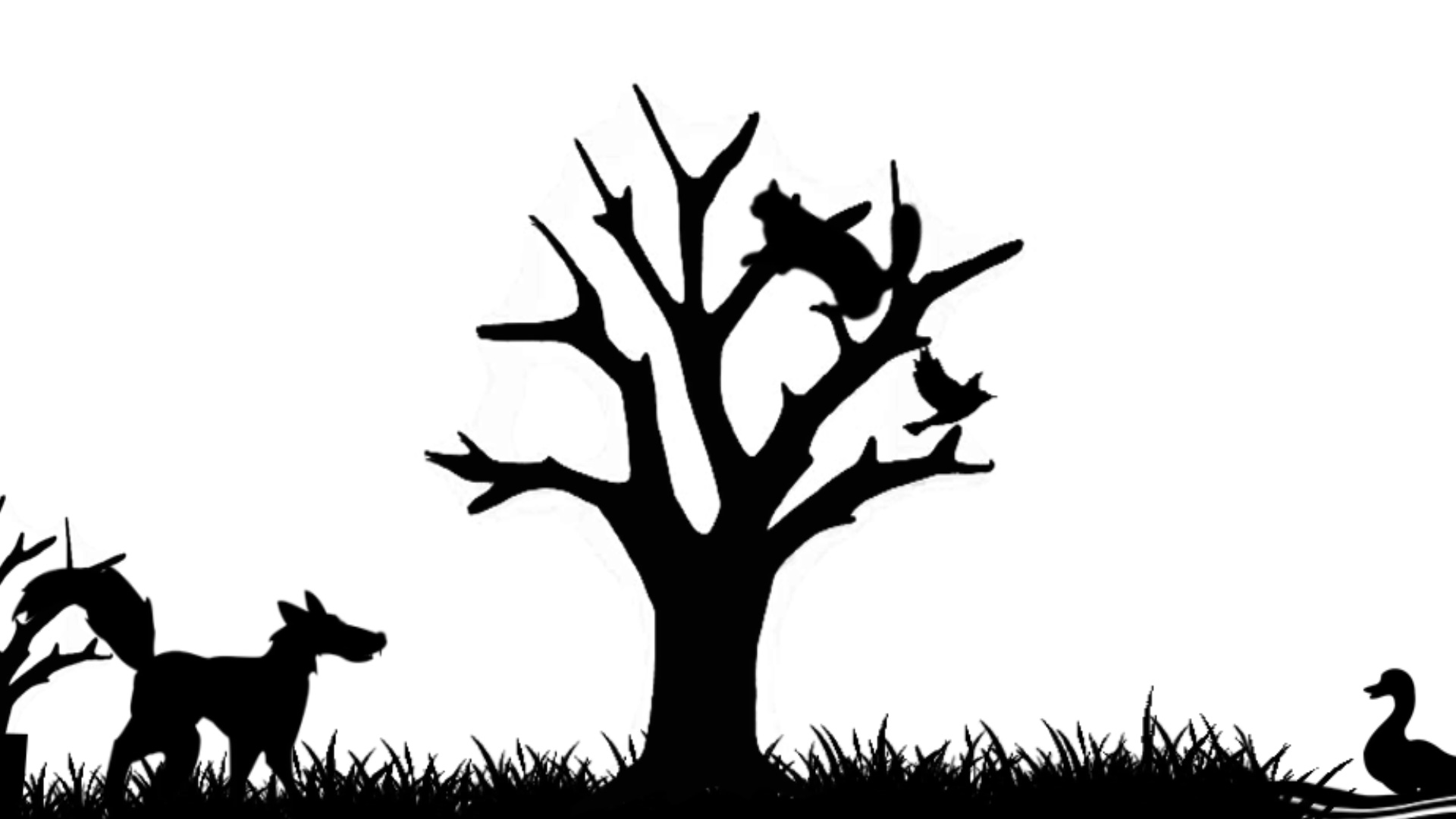 The Adventurous Boy with Woodland Friends: Peter and the Wolf

In 1935 Prokofiev attended performances at the Moscow Children’s Theater with his family. The director Natalia Satz joined them in the box for a performance where they discovered the adults enjoyed the show sometimes more than the kids, so they set out to add to children’s literature. Peter, which uses each instrument and instrument combination to portray a theme and character, was meant to introduce children to the orchestra through characterization and narrative. It also was so popular that banning or censoring it was impossible.

Prokofiev was known for his descriptive and emotionally evocative musical style in everything from symphonies to operas to ballets, bringing to life stories such as Cinderella and the Ugly Duckling. Then, in 1933 Max Steiner gave the world the first score composed completely originally for a movie with King Kong. It wasn’t long before Prokofiev brought his story-telling abilities to film scores including Lt. Kije (1934) and Ivan the Terrible (1947).

But Prokofiev was cautious about the balance between different media. Whil

e working on Peter, he and Satz hired a poet who wrote the story in rhyming verse—which Prokofiev hated. He maintained, “The words must know their place, otherwise they may lead the listener’s attention astray instead of helping his perception of the music.” And with this in mind we present our version of Peter and the Wolf. Our images will not tell a new story but guide you on your own. Like the narration they are simply there to add to the story the music is telling. And in the end, our bird is just a shadow–the real bird is in what you yourself hear from the music and the story it tells you.

Because while Peter and his story were made for children, it, like every good children’s story, has the power to reach us at all ages and in many ways. Maybe you’ll see Prokofiev’s stubbornness and extreme confidence as a child-prodigy known for his arrogance and disdain for authority. Perhaps you’ll find hints of the Soviet ideal of conquering nature, or Prokofiev’s own tenacity in creating art under Stalin. Or maybe you’ll simply see yourself in an adventurous boy who refuses to fear the unknown as he explores the world outside his front door. 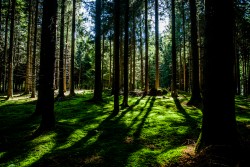 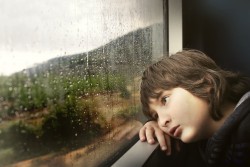 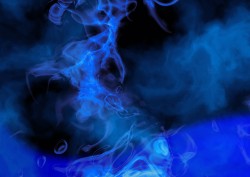 team takes the listener into a whimsical fantasy world in which an eccentric inventor is creating a flying machine. The melodies and rhythms found throughout the piece are designed to feel awkward and uncanny, yet at the same time fun and endearing.”

Our inventor is a complex, fun and relatable character whose many personality facets are heard in the different styles and quirky harmonies of the music. Written at a time when Chelsea was inspired by steampunk jewelry, we can hear the duality in the music that we would see in the mix of classic and elegant Victorian formal dress with fantastical, beautiful, metallic technology in the steampunk look. A visual artist as well, Chelsea composes music while considering color and texture not in the traditional musical sense, but so that her music reflects the color and texture of an actual image. When we listen to Steam, we can hear metals, wood, steam, and other sounds that paint a picture as much as a soundscape as we get to know our inventor.

“The inventor is ingenuitive, intelligent, and elegant, but eccentric and a little lost in his own world. I imagine him as a quirky grandfather-type, with disheveled hair, haphazard magnifier glasses on his face with lenses sticking out everywhere, a temperamental old pocket watch on a chain, and an elegant bronze-colored waistcoat with the buttons off by one. His workshop is full of strange things ticking and bubbling – tubes of green liquid, wobbling pressure gauges, and buzzing mechanical motors. The four movements of the piece each tell a different facet of the story. First we are introduced to the inventor in his workshop, then we see a portrait of him, next a portrait of the machinery itself, and finally the excitement of haphazard flight in his newly created contraption.”

Chelsea Komschlies is a native of Appleton, Wisconsin, and received her Master of Music degree in composition from the University of Colorado at Boulder. Chelsea, who grew up creating and loving all sorts of visual art, often uses real or imagined images as inspiration for her works, and listeners frequently say her music has strong visual qualities. One of her goals is that listeners make deep, instinctual associations with her music, be they emotional, visual, or otherwise abstract. It has been a wonderful adventure for us to collaborate with a living composer on bringing her story to our Friends in the audience. 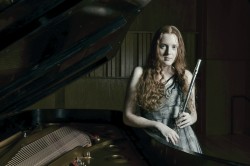 The Prankster: Till Eulenspiegel Einmal Anders

Till Eulenspiegel is a prankster from German folklore whose misadventures trace back at least into the 15th Century. His tricks fluctuate from harmless to cruel but center around the foibles of humans and of societal norms. Ranging from fun to funny to entertaining to lewd to cruel, Till targets every archetype of society from the bourgeois to academics to clergymen to merchants in his many misadventures and portrayals. In some versions he is a good-hearted fool, some a witty societal commentator, some a cruel trickster who takes advantage of man’s faults. But always he is a spirit who makes his presence known.

His name “Eulenspiegel,” means “owl,” “mirror” in German and is thought to allude to a saying, “Man sees his own faults as little as an owl recognizes his ugliness by looking into a mirror.” 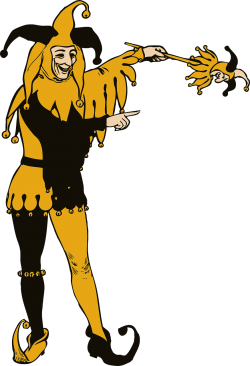 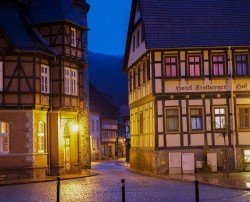 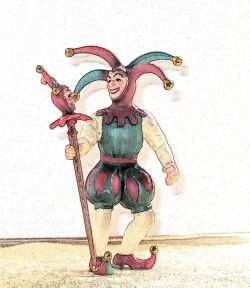 Till’s journey with Strauss began as an opera. Strauss was highly popular and successful in almost all his works at a young age and, despite the philosophical intentions behind much of his work, known for bordering on commercial in how popular much of his music was. Composing in the time of Mahler and Wagner, he paralleled their heroic themes and use of large ensembles. And with opera and tone poems as Strauss’s forte, he was known for portraying story and emotion. Strauss saw an opera based on the Till legends and was inspired to write his own. But after many months with the story, he found Till did not lend himself well to the dramatic world of opera and the episodic nature of his story did not translate well to a single narrative. Strauss said he could hear Till but he could not see him. And so Till’s story came to life in a tone poem, a type of program music that portrays a story or emotion in one movement.

As much as Till’s actions are important in the lessons he teaches us, no one trick can truly represent him. Turning away from opera allowed Strauss to convey on the emotional narrative and journey without distracting us with the literal plot.

Strauss did leave us with motifs that repeat throughout the piece to help guide us. We hear these motifs right at the opening with the violin playing a “once upon a time” theme, and the horn playing the now famous theme of Till himself. Plus watch out for the clarinet’s “laughter” as Till causes trouble. Before the premiere Strauss wrote,

“I really cannot provide a program for Eulenspiegel. Any words into which I might put the thoughts that the several incidents suggested to me would hardly suffice; they might even offend. Let me leave it, therefore, to my listeners to crack the hard nut the Rogue has offered them. By way of helping them to a better understanding, it seems enough to point out the two Eulenspiegel motifs which, in the most diverse disguises, moods, and situations, pervade the whole up to the catastrophe when, after being condemned to death, Till is strung up on the gibbet. For the rest, let them guess at the musical joke a Rogue has offered them.” 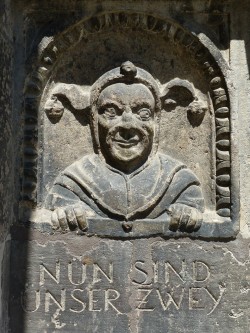 Einmal Anders translates to, “another way,” and is the ambitiously miniature reorchestration of Strauss’s very large original ensemble. That feat alone is a musical adventure, but we use it to take the chance to tell Till’s story another way—our way—Till as we see him and the lessons he has to teach us.

Interview with Founder Jessica about Show

1. Why did you select the stories that will be played out during Saturday’s performances?
Jessica: I can talk for pages about why I love the stories, but the real answer is that they are simply wonderful pieces of music. As much as we are excited about collaboration and multimedia (and the stories themselves), it still has to start with great basics, with a great foundation off which we can build. All of the effects and power of one the multimedia art mirrors and amplifies what we should already be hearing and feeling in the music and the original story. That is what will make it so effective.

And of course I wanted to play a cat in Peter and the Wolf.
2. How have the groups rehearsed for the upcoming show, especially with all of the different aspects?
J: That has been a great adventure. In some respects it has been easier than we imagined–artists are artists and we have the same goal and ideals just different tools–which is of course why we collaborated in the first place. But it has also been a lot of going back to the drawing board and then throwing out the drawing board completely and finding we don’t need a drawing board at all but something totally different! 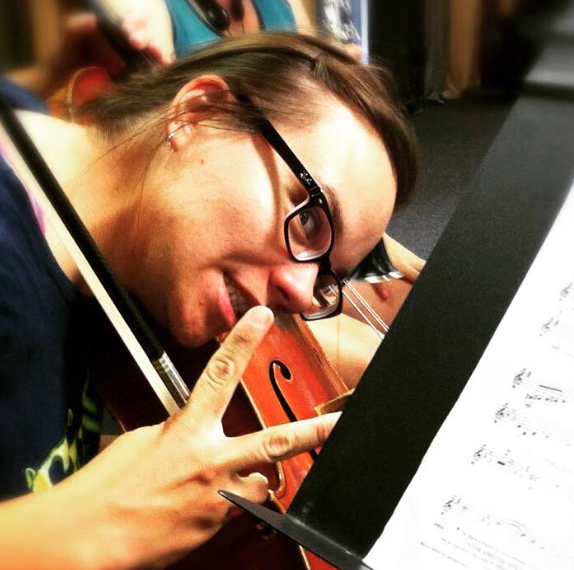 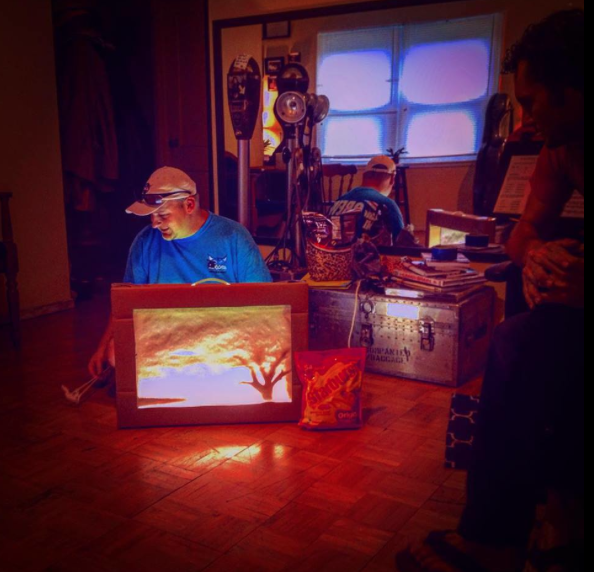 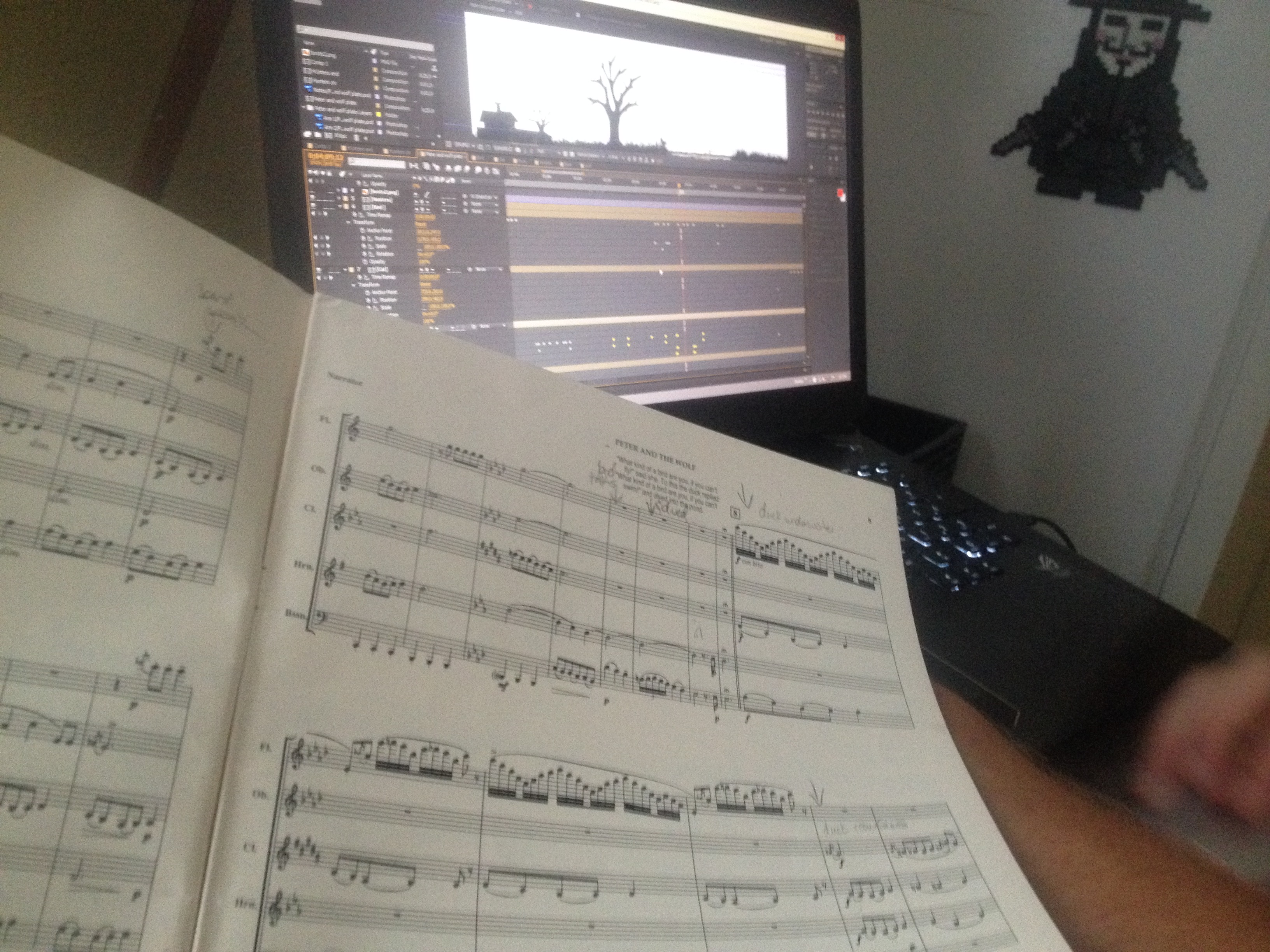 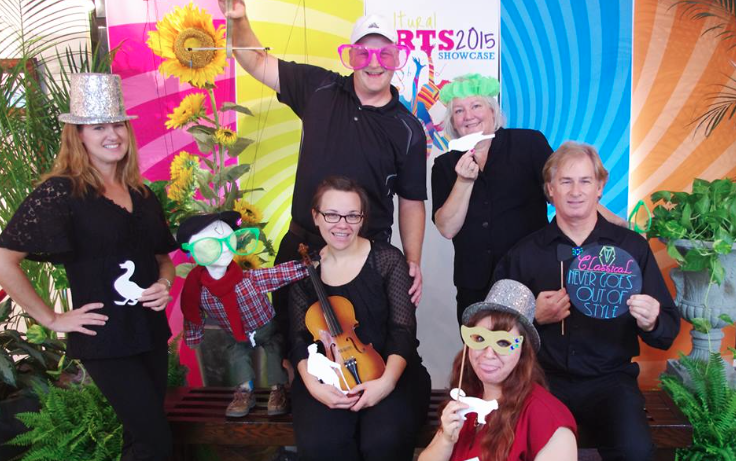 Each piece has been different because each collaboration is different. What has been fun about Peter and the Wolf is that the artists with the vision–Mike and I–are also the artists making and performing everything as much as possible. This is part of what makes our show so special. Our vision for the work as designers and performers is clear because it is our own. And that means we have a lot more control over the experience our audiences will have in making sure our art is affective.

3. Why bring a concert experience like this to Brevard County audiences?

J: To make a great arts experience you need two things–artists and arts supporters. I am proud to say Brevard has both. Multiple theaters, symphonies, bands, dance academies, art galleries, and more are only succeeding here because we have audiences supporting our wonderful artists. I want those arts supporters to get to know their artists better and for artists from different groups to get to know each other because that will only make the community we love stronger and richer.

Hear about upcoming shows and news from your musical Friends